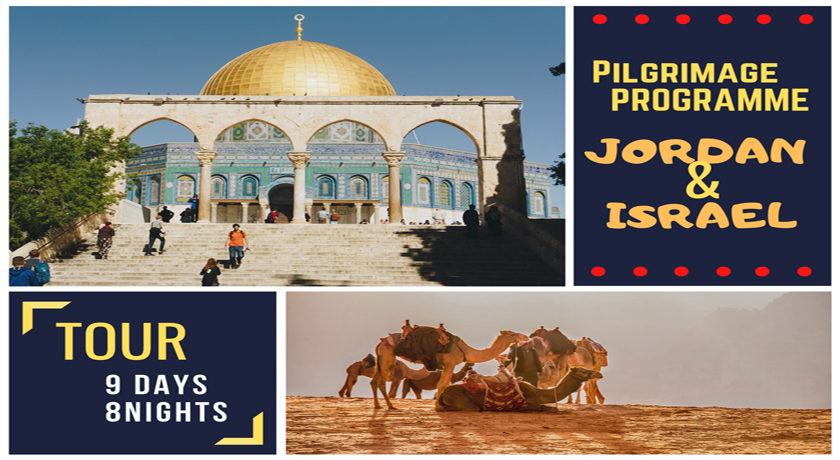 Please be advised that the sequence of the program detailed in this itinerary may change, accordingly to the circumstance; however, all sites will be visited.

Israel, a Middle Eastern country on the Mediterranean Sea, is regarded by Jews, Christians and Muslims as the biblical Holy Land. Its most sacred sites are in Jerusalem. Within its Old City, the Temple Mount complex includes the Dome of the Rock shrine, the historic Western Wall, Al-Aqsa Mosque and the Church of the Holy Sepulchre. Israel's financial hub, Tel Aviv, is known for its Bauhaus architecture and beaches.

Jordan, an Arab nation on the east bank of the Jordan River, is defined by ancient monuments, nature reserves and seaside resorts. It’s home to the famed archaeological site of Petra, the Nabatean capital dating to around 300 B.C. Set in a narrow valley with tombs, temples and monuments carved into the surrounding pink sandstone cliffs, Petra earns its nickname, the "Rose City."

Arrival to Amman Airport – Customs assistance & meet your local Jordanian guide. We drive southward to visit the ancient city of Madaba, best known for its Byzantine and Umayyad mosaics. We will see the Madaba Mosaic Map, an index map of the region, dating from the 6th century, preserved in the floor of the Greek Orthodox Basilica of Saint George. With two million pieces of colored stone, the map depicts hills and valleys, villages and towns in Palestine and the Nile Delta. The mosaic contains the earliest extant representation of Byzantine Jerusalem, labeled the “Holy City”.

We now climb Mount Nebo, an elevated ridge approximately 817 meters above sea level. Mount Nebo is the place where Moses viewed the holy land of Canaan and where, according to Christian tradition, he was buried, although his place of burial is not specified. It is the most revered holy site in Jordan and a place of pilgrimage for early Christians.  Mount Nebo’s first church was built in the late 4th century to mark the site. The Serpentine Cross, which stands just outside the sanctuary, is symbolic of the brass serpent taken by Moses into the desert and the cross upon which Jesus was crucified.  The view from the summit provides a panorama of the Holy Land and, to the north, a more limited one of the valley of the River Jordan. The West Bank city of Jericho is usually visible from the summit, as is Jerusalem on a very clear day.

We now drive northward to the ancient Roman city of Jerash. A strong earthquake in 749 AD destroyed large parts of Jerash, while subsequent  earthquakes, wars and turmoil contributed to additional destruction, but careful excavation in 1806 revealed precious relics to the world, among which two large temples (dedicated to Zeus and Artemis), Hadrian’s Arch, the circus/hippodrome, the nearly unique oval Forum, which is surrounded by a fine colonnade, the long colonnaded street or Cardo, two theatres (the Large South Theatre and smaller North Theatre), two baths and a scattering of small temples, and an almost complete circuit of city walls.

Transfer to Sheikh Hussein, cross the border to Israel, and meet our Israeli guide who will accompany us throughout our stay in Israel. The remainder of the day is at leisure.  (Lunch en-route. Dinner and Overnight in Tiberias/Nazareth.)

We also visit the Church of the Primacy of St. Peter, and then board for a cruise on the Sea of Galilee and then enjoy a St. Peter fish lunch. We will visit Capernaum, where Jesus spent most of his ministry, and chose his first disciples. The floor plan of the Beatitudes Church is octagonal, the eight sides representing the eight Beatitudes.

We end the day with a visit to the Yardenit, the traditional site of the original baptism of Jesus of Nazareth by his cousin John the Baptist. (Lunch en-route. Dinner & overnight in Tiberias/Nazareth.)

After breakfast, drive to Haifa – Israel’s third largest city, and its largest port. Upon arrival, we will visit the world famous Baha’i Gardens, located on Mount Carmel, and a UNESCO listed heritage site since 2008, in recognition of their “outstanding universal value” as holy places and place of pilgrimage for the followers of the Baha’i Faith. Mount Carmel is mentioned in the Old Testament; in the Books of Kings, Elijah challenged 450 priests of Baal, a pagan deity, to call on fire from Baal to light a sacrifice. Baal failed to respond to the priest’s cries. Elijah then rebuilt the ruined alter of the Lord and offered a sacrifice, which was immediately consumed by fire from heaven, even though it has been soaked in water.

We will visit the site of that event, called the Mukhraka, on the highest peak of Mount Carmel.

Then we go to Nazareth, the city where Jesus grew up. Here, we visit  the Basilica of the Annunciation, built on the site where the angel Gabriel is believed to have announced to Mary the coming of the Saviour; the church houses an interesting mix of artwork, mother and child themed gifts donated by Catholic communities from around the world.

We finish the day with a visit of the site of Jesus’ first miracle; Cana and the beautiful Wedding Church, where Jesus was attending a wedding with his mother when he turned water into wine.    (Lunch en-route. Dinner and overnight in Tiberias/Nazareth.)

After breakfast, transfer to Caesarea, the town that was built by Herod the Great about 25-13 BCE as the port city Caesarea Mairitima. In 638, the city was conquered by the Muslims; the walls remained, but within them the population dwindled and agriculture crept in among the ruins. When Baldwin I took the city in 1101/2, during the First Crusade, it was still very rich, nevertheless. The city was strongly refortified and rebuilt by the Crusaders. Saladin retook the city in 1187; it was recaptured by the Crusaders in 1191, and finally lost by them in 1265, this time to the Mamluks, who ensured that there would be no more battling over the site by razing the fortifications in line with their practice in other formerly-Crusader coastal cities. But preserved in Caesarea Maritima are the beautiful Aqueduct, the Promontory Palace, and the Theatre.

Transfer to Tel-Aviv for a walking tour of the “White City” (UNESCO heritage). And then to the ancient city of Jaffa (archaeological evidence shows that Jaffa was inhabited some 7500 years BCE). Walking the small, winding cobbled streets, we discover the house of Simon the Tanner, and marvel at the pristine state of this beautifully restored site, today home to famous Israeli artists.  (Lunch en-route. Dinner & overnight in Bethlehem.)

Transfer to Bethlehem, and discover the birth place of Jesus of Nazareth. We will visit the Churhc of Nativity, and the Shepherds’ Fields, where shepherds kept watch over their flocks by night, and the Shepherds’ Fields Grotto. After lunch, drive to Ein Kerem for an extensive visit of Mary’s Well, the Catholic Church of John the Baptist with its beautiful ancient mosaic floor, the Grotto of John the Baptist, believed to be his birthplace, the Church of the Visitation, the place where John the Baptist’s parents lived when Mary visited Elizabeth, and the breathtaking Convent of The Sisters of Zion.

Transfer to Jerusalem, where we halt at the Knesset (exterior only) & the Menorah of the Knesset, before checking in at our hotel.  (Lunch en-route. Dinner & overnight in Bethlehem.)

After breakfast, we ascend the Mount of Olives where we first take in a breathtaking view of the City of Jerusalem. We then go to the Garden of Gethsemane, where according to the Gospels, Jesus and his disciples prayed the night before Jesus’ crucifixion. Ancient olive trees growing in the garden are said to be 900 years old. We continue our walking tour along the Church of the Agony, the Church of the Ascension, and the Church of the Pater Noster. The Church of St. Anne marks the start of the Via Dolorosa, believed to be the trajectory that Jesus walked on his way to His Crucifixion. Along the first nine Stations of the Cross, we eventually arrive at the Church of the Holy Sepulchre, where the remaining five stations are located. We continue our walk to arrive at the Western Wall, where we will halt for prayer. We see the Temple Mount (exterior only, if not prohibited for security reasons). Near the end of the afternoon, we see the beautiful Church of St. Peter in Gallicantu, before finishing the day on Mt Zion: the Cenacle (Last Supper Room), and King David’s Tomb.  (Lunch en-route. Dinner & overnight in Bethlehem.)

Today is reserved for leisure and shopping only! Bus & guide will remain at your services throughout the day for transportation to the colourful Soukh near the Holy Sepulchre, to luncvh, and back to the hotel. (Lunch en-route. Dinner & Overnight in Bethlehem.)

Breakfast at the hotel, then transfer to the Dead Sea area, where we start our visit with a visit to Qumran National Park, the cavernous site where the Dead Sea Scrolls were found by a goat shepherd boy in 1947. The next stop is at the beautiful Ein Gedi National Park, which offers marvels of Nature and Antiquity alike. We climb up to the Fortress of Massada, the famous site that was conquered by a group of Jewish zealots, and that became their last stronghold. In the year 72, the Romans besieged Massada and succeded in reaching the steep fortress after constructing a huge earthen ramp on its western side. In the year 73, the 960 Jewish zealots living at the top of Massada chose to commit suicide rather than to fall into the hands of the Romans alive. Their deeds left behind a saga of courage, heroism, and martyrdom. (Lunch en-route.  Dinner & overnight in Bethlehem.)

Breakfast at the hotel, and  enjoy a day of well-deserved relaxation and pampering at the hotel’s private Dead Sea beach, spectacularly located at the lowest point below sea level on the planet. The hotel offers its guest a variety of heated and health-promoting pools: a sweet water pool, sulfur pools, indoor heated pool with water from the Dead Sea and Jacuzzi pools, and optionally, visitors might acquire pampering wellness treatments (please note that entrance to the Spa facilities and pools might incur additional fees, and that any treatments need to be booked and paid for on the spot).

Shortly after lunch, we make our way to Tel Aviv where we will enjoy a farewell dinner, before transferring to Ben Gurion Airport for our flight home.